Work to transform a housing estate rife with drug-dealing and gang culture has been recognised with a national award.

Grand Union Housing Group won the award at the Community Awards by Aico|HomeLINK in the category of Neighbourhood Transformation for their work on the Bilberry Road estate in Clifton, Bedfordshire.

Residents on the estate were living in fear five years ago, but thanks to the work of Grand Union, Central Bedfordshire Council, the police and the local community, the crime taking place there has been eradicated and residents now say it’s “a really nice neighbourhood and a lovely place to live.”

Rachel Welbourn, Grand Union’s Successful Tenancies Team Leader and one of the key members in the team who worked so hard to transform the estate was there to collect the award. She said: “I’m really pleased to be able to collect this award on behalf of everyone who helped transform Bilberry Road from a place with persistent antisocial behaviour issues into a safe community.

“While I’m proud of the work both Grand Union and our partners have done on the estate, the local residents really deserve the recognition for making a stand and working alongside us to help to rid the area of ASB.”

As well as taking action against the perpetrators, which included issuing, community protection notices, an injunction order and then four simultaneous full closure orders – a first for Bedfordshire – Grand Union has been working hard to carry out estate improvement work and has introduced a new community hub to help with community engagement.

Architect and TV presenter, George Clark, hosted the awards in Birmingham which recognised the achievements of inspirational individuals and organisations working within the local community and social housing. 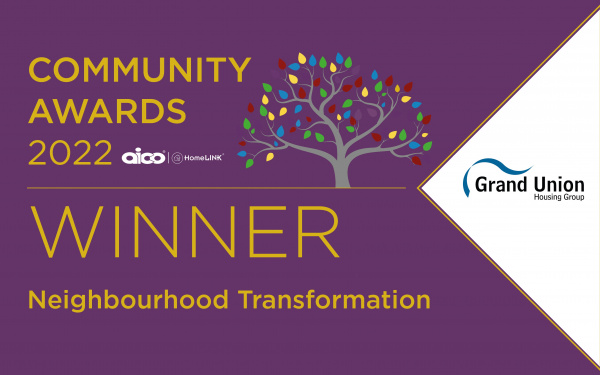